Thousands of gaming freaks are facing charging issues with the PS4 controller. If you’re also facing difficulty charging your Playstation 4 gaming controller, you can try a few steps to recognize the issue and fix it without buying a new one.

Why my PS4 controller won’t charge with USB?

There are many reasons why a PlayStation 4 console battery won’t charge. It often happens due to some minor faults, and we can fix that home.

Sometimes, the PS4 controller won’t charge because of some major faults like dead battery life, a problem with PCB, or major hardware failure.

In that case, you need to replace your PS4 controller or get it repaired by a professional technician.

Before replacing your game console, you can troubleshoot the problem and try these DIY steps to fix it at home.

How To Solve PS4 Controller Not Charging?

You can follow these simple steps to fix the charging issue of the PS4 controller:

What if I tell you that your charging cable could the first reason why your PS4 controller is not charging.

You won’t believe it, but the USB cable is the main culprit, and it should be checked first if any device won’t charge.

We usually remove the leave the charging cable as it is once the device is charged. It’s the most vulnerable part that causes problems in charging a device.

You should visually inspect your USB charging cable and replace it immediately if you find any sign of damage.

A damaged charging cable can damage your PS4 controller charging port. You should buy a good-quality USB cable to charge your gaming console.

Sometimes controller won’t charge if you plug it into the Playstation itself. It happens if you play heavy games on Sony PS 4 for longer and the console automatically tries to maintain the temperature.

You can charge your PS4 controller with your MacBook or Windows Laptop. The power output of MacBooks and Laptops is almost nearby the power required for charging your controller.

It attracts the dust and debris from the couch and prevents electricity flow, due to which your gaming controller won’t charge even if plugged in properly.

You need to clean the micro-USB port carefully and frequently. If you notice any debris stuck inside the port, you can use a toothpick and isopropyl alcohol to remove it carefully.

Once you finish cleaning the micro USB port with cloth and alcohol-based cleaner, wait for a few minutes to vaporize the alcohol. Now plug the charger carefully to see if it’s charging or not.

Resetting a device can fix many software glitches. If none of the above-mentioned solutions works, you should reset your PS4 controller and pair it again.

The process of resetting a PS4 controller is quite easy because Sony provided a physical reset button on the back of the controller.

Use a SIM ejector tool or toothpick to press and hold the reset button for five seconds. Once it’s reset, you can pair it again with your Playstation 4.

If you’ve tried all the above-mentioned steps, but your PS4 controller still won’t charge, then it’s time to replace the battery. Because of regular use and multiple charge cycles, the battery life reduces.

It’s not easy to replace the PS4 controller battery at home. You need to send it to a repair shop and get the battery replaced by a professional technician.

Generally, the problem lies with the USB cable or power source, due to which the PS4 controller won’t charge. I know it is annoying if something happens between a league.

You should check the USB cable first and verify that it’s working. If any other device is charging with that cable, it means the problem persists in your controller, and you should follow the remaining steps to fix it. 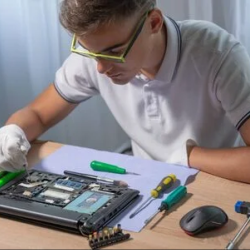